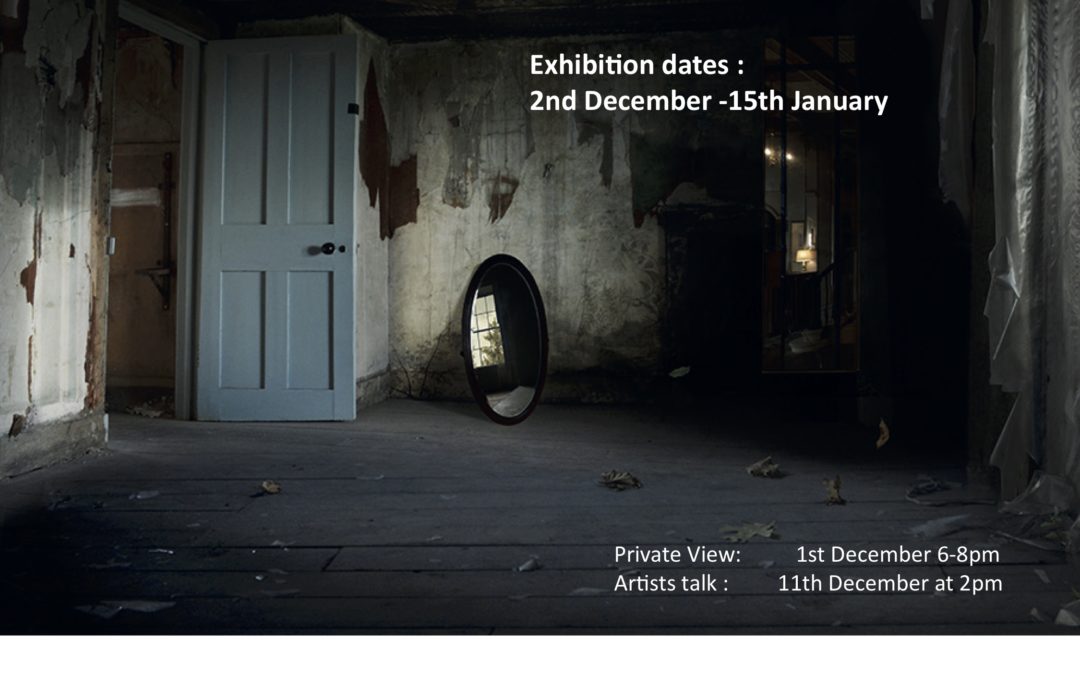 Staging Time Suzanne Moxhay and Jenny Klein have taken the stage at Tension Fine Art gallery with a series of works that share a progenitor: the photograph. Different as they may be in vernacular and tone, the works from Moxhay and Klein are alike in that they take the photograph as material with which they play, resisting the 20th-century representational ideals of the photograph in order to embrace mixed media and collage, by different means, to a point.

The photograph, phenotypically a proxy of ‘truth’, of document, of reality, is mutated to take on a new language in the works presented. To the nascent viewer, the obvious differences between the two artists will be the focus of their lens: where Suzanne Moxhay kneads interiors until they are firmly rooted in the realm of the uncanny, Jenny Klein is introducing new materials that re-territorialise the human forms represented by photographs and drastically alter their – if there could ever be such a thing – meaning.

If cameras make the visible simply visible for longer, the so-called ‘freezing’ of a perspective on a specific period of time, Klein’s work is interested in the not-so-visible, in marking what seems to be a photograph between an existing photograph, by taking thread and needle and stitching into – or out of – these prints some hidden emotion, movement, or reality. If the sister fates are weaving, then Klein’s work explores the thread tying one thing to another, the seen with the unseen.

It is in the image of the sister fates where we stumble upon the gendered aspect of the works, that in dealing with self-portraits of her own body of bodies that escape the male gaze, we see the use of stitching: an act that up until recently remained heavily gendered, in our social context, to be a ‘female’ act. Perhaps, then, Klein is herself usurping the Fates and showing what is not represented by the image, revealing the fragile, tenuous relationship between photograph and subject, its fraudulent claim that the woman in the pictures is her, and that the internality of her being is adequately represented. What may have been a few minutes in front of a camera, remote shutter clicking away, is, after all, a far more fleeting practice than the labour of stitching, of taking thread and making it part of a photograph, of outlining what a camera cannot see, cannot feel. This ‘stitching’, then, is an act of reclamation.

That stitching, reclaiming the space between the internal and the external, is where Klein’s work becomes so evidently kindred with Moxhay’s.

Suzanne Moxhay’s work seems, on a surface level, vastly different. Prints, photographs, sure – but there are no human figures, no needlework – at least, not in the same vein as Klein’s. Instead, there are dramatically lit and balanced photographs of interiors drowning in vegetation, with a quality to the light that seems unreal and dreamlike, but not unbelievable (as all dreams are available at the moment).

The brilliant dominance of flora in these photographs ‘of’ interiors indeed contrasts greatly against the decrepit and fading – albeit persistent – elements of ‘man-made’ or ‘unnatural’ elements. These prints are art-as-eco-criticism, or eco-criticism-as-art, in that there is no outside or inside, no man-made or natural, but a collective entity that defies such binary thinking. These photographs are not a collective of single data points but several stitched together compositions and collages. The totality of which, as is, seems to spur an itch in its viewing, that the scene is not quite real, that within any one of these landscapes or interiors is another landscape, another interior, a Matroska – or crowd of matroskalar – of spaces; a fractal net of rooms and flora that feel uncanny, Unheimlich, in the truest of senses.

On some level, we know in Suzanne Moxhay’s work as well as Jenny Klein’s that what we’re seeing isn’t real, or that what is real shifts under us as the artists draw lines with a lens, or a stitch, or some thread. Perhaps this is done on a whim, perhaps it is a laborious and continuous effort to mine compelling images. Either way, the work is not directly autobiographical, nor are they ‘meta’ in the simple, navel-gazing sense. Instead, they are emotionally present and self-aware of the limits of photography and its relationship to the world. If that strain is present on the artist’s mind, then those strains are there in this work as well, and consequently weighing upon the viewer. Invisible though those strains maybe, work can be done to see them, in intimate ways; not as questions or answers, but straight contemplation.

Normal opening hours: Thursday to Saturday 11am-5pm, or by prior appointment.